If there is one major storyline to watch this NFL offseason, it’s the 2021 NFL QB carousel. The potential movement of a number of star quarterbacks across the league is astounding. Now, while not all of these quarterbacks will have new homes in 2021, not all of them will stay put either.

Here are the biggest names to watch this offseason, along with some of their potential fits.

SPORTS BETTING 101: HOW TO BET ON FOOTBALL

The crown gem of the offseason, Deshaun Watson is the best quarterback that could potentially switch teams this spring. The Texans’ star signal-caller is unhappy with the franchise. Although the team has stated its disinterest in trading him, it could have no choice if he truly is done with wanting to be there.

Still just 25 years old, Watson is one of the premier quarterbacks in football. Although Houston’s wins and losses weren’t impressive, his fourth year was arguably his best. He threw for a career-high 33 touchdowns with over 4,800 yards.

He is also signed for the long term, as he’s under contract for the next three years with the potential for five.

Naturally, should Houston actually part with its star quarterback, it will demand a generous package in return. Expect multiple first-round picks as well as other draft picks and/or players to be the general return a player of Watson’s caliber will retrieve.

So a team like the Dolphins or 49ers, one with draft picks to burn and potentially a quarterback away from being a contender, should be all-in on acquiring Watson.

There was a time when Carson Wentz would fetch a package similar to what Watson may bring. But after a career-worst year, this may be more of a case of Philadelphia wanting to part with its former second-overall pick due to performance and financial reasons.

In 12 starts, the 28-year-old Wentz threw for 16 touchdowns with a career-high 15 interceptions. He also set career lows in yards and completion percentage and a career high in sacks taken. 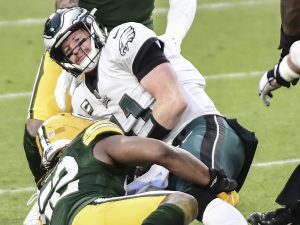 Wentz threw for 16 touchdowns with a career-high 15 interceptions

There’s also his contract, signed a couple of years ago with the Eagles, that bumps his cap hit up from $18.6 million in 2020 to $34.6 million in 2021. With last year’s second-round pick, Jalen Hurts, showing potential while costing a lot less, Philadelphia will almost certainly trade Wentz.

Although Wentz’s performance in 2020 was poor, there are a few teams who could see him as a bounce-back candidate. One of those teams may be the Chicago Bears. They have a quarterback gap to fill and whose passing game coordinator John DeFilippo was Wentz’s quarterback coach during his incredible 2017 campaign.

It’s the same for the Colts, whose head coach Frank Reich was Philadelphia’s old offensive coordinator with Wentz. Online sportsbooks expect those teams to be the finalists barring any mystery teams.

Others on the 2021 NFL QB Carousel

While the most talk is currently buzzing around Watson and Wentz, there are a number of other quarterbacks who could be on the move. These extras are what will make the 2021 NFL QB carousel very interesting. With so much talent available, teams will be more apt to make a move.

Depending on who the Jets take with the second overall pick in the draft, Sam Darnold could be shipped out to a team willing to take a chance on the young quarterback. Perhaps that could be a team like Indianapolis if it misses out on Wentz. Or even a team like Carolina if it doesn’t land Watson.

A couple of high-priced veterans may be on the move as well. Minnesota’s Kirk Cousins and San Francisco’s Jimmy Garoppolo are two guys who signed big contracts but are on teams that may be looking to do something different.

One option is a swap for each other, similar to the trade from a couple of weeks ago with Matthew Stafford and Jared Goff. 49ers head coach Kyle Shanahan coached Cousins in their time in Washington and has reported interest in reuniting.

Meanwhile, Garoppolo would go to Minnesota along with a draft pick or two, costing slightly less than Cousins and being eligible to be cut for very little dead cap.

Say It Ain’t So – Matty Ice and Russ?

Finally, there are a couple of huge names that may be a part of the carousel. They are Seattle’s Russell Wilson and Atlanta’s Matt Ryan. It’s more likely Ryan gets moved, considering the Falcons may draft his replacement at fourth overall. But it may make more sense for them to hold onto him for at least one more year before cutting him for $26 million.

As for Wilson, talk of his unhappiness with certain aspects of the Seahawks is a story that is starting to brew in NFL circles. While it’s unlikely that Seattle would trade the 32-year-old superstar, several oddsmakers have already put odds on trade destinations. The Raiders, Cowboys, and Jaguars lead the way.

Obviously, a Las Vegas or Dallas deal would include a swap of their quarterbacks. Derek Carr and Dak Prescott would move, while Jacksonville would likely part with the first overall pick.

Before you move on, take a look at Advanced NHL Stats to use.